Pregnancy has to be one of the most magical, amazing things in the world. Here it is, a woman carrying new life within her own body… it’s just such a spectacular thing. I always have been, and always will be in awe of women who chose motherhood. Is there really anything more beautiful than a happily pregnant woman? I think you’d be hard pressed to top it, honestly.

Since I find pregnancy to be such a beautiful thing, I have had goals for a long time to delve into massage to assist the pregnant woman. From pregnancy massage, to labor and delivery massage, to post-partum massage… you name it I’m interested in it! I am even considering becoming a doula, but one step at a time.

In fact, originally I was going to wait on all the advanced pregnancy massage CEUs until after I finished my beloved advanced Shiatsu CEUs because Shiatsu is my one true love in massage… but then a good friend of mine became pregnant! She is someone who has always wanted a big family, and desired a natural-as-possible birth, so when she learned that massage can assist with that she was ready to explore that option. This of course meant that I needed to get the knowledge to help her with that. 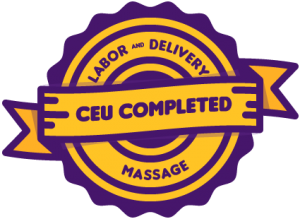 I took a CEU for Labor and Delivery Massage at the end of September of this year, in preparation to help my friend. Not just my friend though, my intention was to take this knowledge far beyond her but then part of the CEU talked about some of the nitty-gritty details about hospital liability to have a non-employee there and just… sigh. It’s a big gray area basically where it’s not illegal for me to be there, but it does make hospitals uncomfortable. So… what can you do? It did mean that I had to start wracking my brain though for how I was going to use this knowledge beyond my friend because I don’t want to put anyone in a sticky situation, that’s just not my style.

Before I could come up with a conclusion, my friend went through some utterly crazy life happenings (of which are incredibly personal and I will not be discussing here), and it made her second-guess how many people she would actually want in the delivery room, which is totally fine as her comfort came above everything else. Again though, it left me to wonder about this knowledge… yes, I would use it eventually but when? How? Could I work it into my practice? How did I want to do so? Just so many questions…

In my typical fashion though I shoved them all to the back-burner and just pushed forward. I trusted that the universe would show me the path that I could take with this knowledge, and I was not wrong.

Fast forward to Thanksgiving, and my friend has sort-of started labor. Now all of us are super excited because she’s past her due-date by a few days at this point, and we can’t wait to meet her sweet little bundle of joy. She just wants to eat turkey first, and who can blame her? Haha.

Labor wouldn’t actually really start until Saturday though, two days later. Prior to this I had jokingly said that her baby would decide to come during Black Friday rush hour in a snowstorm. I was almost half right… whoops! Luckily she went to the hospital to deliver before the snowstorm hit that Sunday (and then lasted until Tuesday and dropped two feet of snow on us and shut a lot of things down).

Back to Saturday though, so labor has started, but it’s irregular. We chatted back and forth via text (gotta love modern technology) as both of us went about our days. I had an engagement with my younger sister for wedding prep stuff, and my friend just generally wanted to see how it’d progress. I told her to let me know if she wanted me to stop by and help though, and gave her my schedule.

Come that evening she was ready for help in getting labor to progress. The contractions were a bit painful, and they would not stabilize. So I traveled to her home where she and her mother (and dogs and cats and bird) were chilling, timing contractions and watching Food Network. I arrived around 6:30pm, and I would work with her until around 11pm when her mucous plug came out, her contractions were painful and pretty regular at 5min apart, and it was time to go to the hospital.

During that time though was beautiful, at least to me. I can’t say it was necessarily the same for my friend, because from what I understand contractions aren’t really the most awesome thing to experience. Still, from the comfort of her own home I helped to relax her, relax her hip muscles, calm her anxiety some, and bring her into a more grounded, centered place to really prepare to give birth; not to mention offer some pain relief through the use of Gate Control Theory (the sensation of touch is faster than the sensation of pain to the brain, basically). This is the power of massage, and it is such a blessing. Truth be told, while I did use techniques from the CEU I had taken (and taught a couple to her mother), I actually used a lot of Shiatsu with what I did, too. Working the specific points on the meridians to help with labor progression, and some of the lovely stretches that come with side-lying seemed to elicit the most comments from my friend that it felt good and she was enjoying what she was receiving. 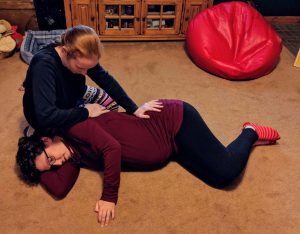 I didn’t ask to be photographed during this, my friend did. And then sent them to me with the message, and I quote, “promote yourself”. So here we are, on the floor (with a fireplace nearby, not shown), working on some stretches. Usually you want to prop limbs up with pillows and bolsters and stuff but honestly the most important criteria was met for this night: she was comfy.

When the labor became active (not long after the photo was taken by her mother, honestly), I offered to accompany her to the hospital if she wanted. She declined, but knew she could call if she needed me. I never ended up at the hospital with her, but that’s okay. I learned something from this regardless.

I learned that I can use the knowledge to help women move from pre-labor to active labor. I don’t have to go to the hospital, I don’t have to worry about hospitals being uncomfortable with my presence… I can just use massage in the early stages to get things started, and leave it at that. Of course if someone really wants me to go with them that’s not off the table, but this really does open a path to use the knowledge I have gained in a way that all parties involved can be comfortable with, and I wouldn’t have learned this if things hadn’t gone the way the did with my friend. Well played universe, well played.

This means coming in 2020 I’ll figure out the details for how I want to showcase this, but if you’re interested in receiving the kind of gentle massage my friend did to help with your labor, I can do that. You’ll definitely need to see me for one or two pregnancy massages first so we have a rapoir with each other before I come to your home, but we can work those details out together. I’m excited.